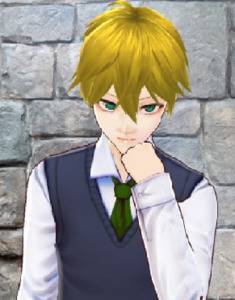 Alexander is a tall, blonde human boy with green eyes. Especially tall, considering the year group he is in right now.

Though he is not heavy, he does have a larger chest and shoulder than people of his fellow years, generally giving the appearance that he is a bit older than what he should actually be, at least if one graduated after each year.

His hair is relatively clean, with a small ponytail going almost halfway down his neck. Whilst the rest of his hair is in an almost 'random' pattern, though it does have some order in it.

In the Slytherin common room he can be often seen with the wall to his back, almost never in the open.

Alexander's eyes are quite controlled, mostly showing what he wants others to see. But if one is to look deeply in Alexander's eyes they can see an inherent distrust for most people. Especially people who look to be the same age or older than him.

Under his hogwarts robes (or tucked away just at the hip inside of his pants when without robes) he holds a small diary. One that he writes in at any time he can with a small ballpoint pen attached to it.

When Alexander is with those he really trusts(Or if he wants to appear friendly to others), he often has a small smile. And in his eyes shine a small light of enthusiasm. An extra spring in his step, a broader and more confident stance.

Yet when they are gone, he most often looks tensely contemplative. As if constantly considering various conundrums.