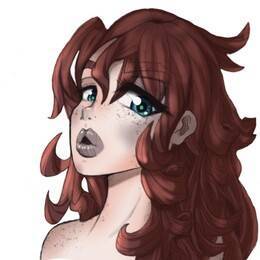 At a glance, Aislyn looks to be slightly shorter than average at about 137cm in height, as well as looking to be of a normal weight for a girl her age.

Her warm, dark auburn hair stands as a stark contrast to her, pale as moonwashed stone, skin. Her skin appears to be sporadically dotted with dark freckles, save for her face which has a large concentration across her cheeks and nose.

Her short hair is typically pulled into a ponytail, with only the slightest tuft of hair extending beyond the hair band and several loose bangs framing her face.

Looking into her ardent gaze would be akin to looking at a pair of blue moon quartz gemstones. A keen observer would perhaps notice half limbal rings on the outside edges of her eyes.

Inquiring about her basic history, you would hear about how her father is a professor at the University of Cambridge, and that her mother was a fortune teller who roamed about Ireland upon her whims. Her father was obviously able to court her mother, and they settled down in Cambridge. Her magical blood comes from her mother of course, which her father found fascinating on several levels.

Aislyn prefers being able to move around, opposed to being stuck reading books or doing homework. She's of a much more practical mindset, finding theory to be "boring" and "much less useful than doing something." Growing up, her mother has spent a fair amount of time teaching her divination skills, and although Aislyn is adept in that area, she finds divination to be largely not fun, due to her active personality.

She will sometimes comment on how she likes traditional muggle cooking methods, as opposed to magical ones. Usually preferring hands-on to magical methods in most areas. Or how she likes gardening when half the plants aren't trying to kill her.

If asked about dislikes she will almost immediately respond with reading and homework, but given some thought she will also mention transfiguration.