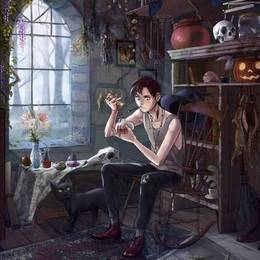 Background:
Kevin Grandsmith was born and raised on a farm in Galway ,Ireland by his wizard mother Eleanor and grandfather Fergus.
He's polite, sweet, light-hearted and perhaps a little too arrogant. He was born in a small family in a farm community. He lived free of worries until he was about 9 years old, but at that point things began to change. His father passed away tragically.
He went on an adventure and was strengthening the relationships with friends. Having overcome plenty of obstacles, he is going on a journey in a fantastic world of Hogwarts. But with his compassion and honesty, there's nothing to stop him from climbing to the top. He could quickly become an unstoppable force of magical energy.
But anything could happen; he is currently looking for a place to truly call home. He feels like there's more secrets than answers in this world. Luckily he has great people around to support him. He is average build, dark brown hair, about 175cm tall and enjoys tending to the farm during the day, and staying indoors working on his potion mastery during the night. His love of potions came from his mother , a healer and scientist in the magical sense.
First meeting him you will notice that people skills are not his strong suit and that he would rather be communicating with magical creatures or training them. When you do get to know him though you will meet a brilliant lad with a nose for adventure and readiness to participate in all sorts of activities. His love of adventure comes from his father , a magical creature trainer, who...unfortunately passed away on an expedition to find an ancient dragon which was rumored to live in the mountains of magical Scotland. The tragedy hit him hard because the first 8 years of his life was hearing all of his fathers stories and getting to meet and play with all sorts of creatures. He has waited his whole life for Hogwarts and is looking forward to his first year.