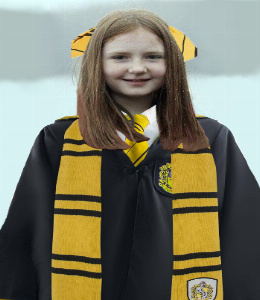 Physical Description: Emma is a what she considers normal and maybe even a bit boring looking. She is an average height for her age, 4 foot 8 and weighs roughly 48 kgs. Her pale white skin becomes red and burns with what seems a minimal amount of sunshine and causes her to frequently apply sunscreen no matter what weather or season. This application is also rushed at times so there have been more than a few mornings she will rush around with some white(r) areas of her skin before someone points it out or she looks in the mirror. The features she loves (or hates depending on the day) most is her blazing red hair, that is pin straight although humidity can add a bit of a wave, and her blue grey eyes. Really she loves and hates her hair for the same reason; They help distinguish her from others. It's a somewhat unique combination that not many people see. And of course there are many who love to exclaim over red hair especially recently. No longer is she taunted with carrot-top but instead she has people coming up, stroking her hair and telling her it's such a beautiful color. If she's in a good mood, then it's fine if a little embarrassing but on her darker days she just wants everyone to leave her alone and to be able to hide in a corner without being easily discovered.

Mental Description: Most days Emma is a happy ray of sunshine, although quiet and happy to stay in the background. She truly is an introvert although she does require some human interaction to feel satisfied. It's just that that interaction drains her and she needs time to herself, whether with a book or listening to music to recharge her batteries.

Another thing to note is that Emma hates getting in trouble. She feels like she's a disappointment who's also an awful, absolutely terrible person whenever she does something wrong or lets her temper get ahead of her

She doesn't speak up much, but she does have the typical Irish/redhead temper. She can handle a lot of things but if you push her too far, do something she considers very wrong or try to interact with her when her batteries are too low, she does explode. Most times her temper flares and then after some quiet time, she will cool down, but there are other times where it just gets under her skin and will not let go of her. In that case, she'll be in a bit of a mood, mumbling under her breath and pacing for several days. Once these tempers flare out, she's very embarrassed and constantly second guessing things in her head. But she will apologize.

Emma can also live a bit in her head, constantly having attacks of conscience or second-guessing her actions. There have been nights where she'll fall asleep, only to wake up and remember something that happened years ago only to dwell on it for ages. You can tell that she's in one of these spells when she's even quieter than normal, and hiding herself away. Emma realizes now it's likely she has some anxiety but has not been seen by a psychiatrist because she keeps it all inside and feels that this is normal, and she really is fine.

On her darkest days or when overloaded with people, Emma can be a bit louder than normal, while maintaining a steady inner dialogue that is overly critical of others and constantly sarcastic. Which then starts a cycle of feeling bad for her her thoughts even if she doesn't share them. She can usually shake herself out of these moods with quiet time or just a peaceful night of rest, but it may take time and she may be snappier than usual in the meantime. There really seems to be no rhyme or reason behind when she as an excellent day where she's feeling as high as can be to a sudden plunge into the most horrible days she's experienced.

Biography:
Emma was born to Macey and Christian Wynn on March 10, 2010 in Belfast, Ireland where the family continues to live. Two years later, her brother and sister, Bryony and Zachery Wynn were born. Her life was what she likes to think is a normal life. She lived with her parents and siblings in a small house in downtown Belfast, which was not far from her school and one set of grandparents. Before starting school, she would spend the days with her grandparents where she became quite close to her grandfather, both enjoying books and quiet time. In fact, her grandfather and she would frequently be found in a the living room or out in a park, books in hand. They would take breaks to discuss both books, and her grandfather was happy to listen to her talk about her book even when it was nothing more than a picture book. She did spend time with her grandmother, but just clicked with her grandfather, two peas in a pod.

Once she started school, she would frequently pop by to tell her grandparents about her day and discuss the intricacies of her latest book or the intrigue at school. Her grandfather and mother were the ones who were able to keep her going to school when she struggled to make friends and there were times when the draw of her grandfather after school was all that got her through.

While she loves her siblings, she feels excluded at times as they have their tight bond as twins and she is on the outside of that. Not to mention that her siblings are more active and extroverted. This can overwhelm Emma at times and she retreats to her room or a park nearby to decompress.

During her time at muggle school, Emma became best friends with one girl in particular, an extrovert who kind of claimed Emma and drew her out of her shell (and the book corner). Through Lydia, Emma made several more friends, and acquaintances but Lydia is her closest and dearest friends. While she is able to converse and enjoys spending time with her other friends, Lydia truly is her best friend and will always be, even though Emma is struggling with the secret she must now keep.

First Instance of Magic: Honestly, Emma is still a little shocked that she is able to perform magic. Looking back the first signs were very subtle indeed. She would find pens, books and other supplies out of the place she remembered finding them but in much more convenient places at just the right time. One time, Emma was scrambling to finish an essay and her pencil broke, causing her to groan in frustration, only to reach up to brush her hair out of her face and discover one behind her ear. But she couldn't recall ever placing one there.

The largest and most obvious instance of magic that scared Emma before it was explained that she was a witch was on a day when she thought she was going to be in terrible trouble. She had received after her temper erupted when a boy was picking on her and her friends. She had to take a sheet home to her parents explaining the detention and have them sign it. Out of her normal routine, she went straight home rather than to her grandparents and placed the sheet of paper on the kitchen counter. She then ran up to her parent's room and hid in their wardrobe, pressed back to the very back of the wardrobe. Well, of course her grandparents got ahold of her parents who then came back to the house and frantically searched. But the strange thing is even when they shone a flashlight in the wardrobe and Emma was sure she was caught, as the beam shone bright upon her. But her mother's frantic face didn't register any changes and instead the calling of her name and searching continued, before it faded as her parents began searching the neighborhood. Emma thought they were playing a game or punishing her for getting detention. Finally, the need for the bathroom forced her out of the wardrobe and after using the bathroom, she ran back to her room. Her parents were about to call the police when they did one last look and discovered Emma asleep, tears on her face in her bed. Emma got in a lot of trouble for that one even though she insisted that her mum had looked right at her when searching in the wardrobe. This meant she had to do several extra chores and was grounded for three weeks because her parents believed she had run way and then lied to them about it.