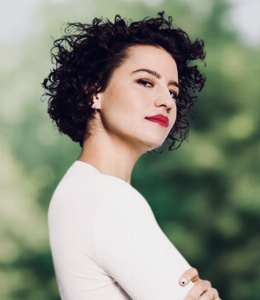 Physical Description:
Miriam Stube carries herself with confidence as she stands at the average height of 5 feet 4 inches (162.5 cm). Her dark brown eyes are usually found scrunched up when she is analyzing a broom game or wide with excitement when ideas come to her mind. Miriam has almost black curly hair cut short in order to stay out of her face when riding a broom.

Mental Description:
Miriam is a woman who thrives off of adventure. She is a typically happy individual and will almost always have a smile on her face. However, Miriam does not take her job lightly and will become very assertive when students joke around in her class. Away from class, she loves to crack jokes and make others smile.

Biography:
Miriam was born to Stephanie and Matthew Stube on the 8th of August 1988 in a small town called Lind. Matthew and Stephanie grew up in Lind and were childhood best friends. Surprisingly when they were eleven, Matthew received an invite to Ilvermorny school of Magic. He left Stephanie behind but their friendship stayed throughout the years he went to Ilvermorny. Stephanie worked to become a lawyer as Matthew found his place as a newspaper editor. After years of being friends, romance bloomed and they got married.

The two stayed in Lind and lived in a little quaint house on the edge of town. When Miriam was born, the two decided to stop having Magic around the house in order to not taint her childhood. Unfortunately that dream was short lived on Miriam’s 6th birthday when she came across a broom in her dad’s room. It was not a regular kitchen broom and Miriam really wanted to touch it. However, the broom was behind a bunch of items and she wasn’t able to reach it. Then all of a sudden, the broom flew into Miriam’s hand, proving that she had Magic in her.

Miriam was in love with the broom and received a toy one soon after. At the age of eleven, she was sent to attend Ilvermorny School of Witchcraft and Wizardary. Her adventurous personality sorted her into thunderbird and she found very happy within the school. Anything involving brooms stood out to Miriam and she played every broom game possible. Quidditch was fun but Miriam found it to be a little bit boring so she settled with broom racing instead.

Upon graduation from Ilvermorny, she joined a professional broom racing team to try and find adventure. Miriam was so excited about broom racing that each race proved to exhilarating. After 15 years of playing, Miriam decided that it was time to find a new passion where she wasn’t putting herself in danger everyday. Luckily, Miriam heard that Hogwarts was in need of a new flying Professor and found herself excited to teach kids about what she loved.