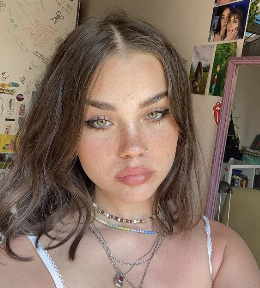 Avery, by most standards, is a pretty girl. With her wavy, light, golden-brown hair, and hazel eyes, she has a look of innocence about her, instilled from the beginning by a safe family home. Standing at 4'8 she often has to look up at others, something the girl despises. You can often find Avery wearing rumpled, often oversized sweaters and simple trousers. She is not one to be overly concerned with her appearance, other than appearing somewhat put together, though that look usually fades by the time the girl is done with her day. She wears no jewelry other than her grandfather's watch which hangs loosely on her left wrist. A budding botanist, Avery is often found with mud splatters on her clothing.

As one may be able to tell, Avery is not a vain girl. She lives life with one goal, to learn. She can often be found exploring the libraries of Oxford, where her parents taught, and striking up conversations with sullen academics who would rather be run a marathon than talk to a little girl, but by the end of the conversation, each feels a special kinship towards Avery.

As mentioned before, Avery grew up in both the town and the University of Oxford, where her parents are both professors in medicine. Up until the day she received her Hogwarts letter, Avery wanted to follow in their footsteps and specialize in natural medicine. Avery was homeschooled growing up, taught with a group of other professors children to read, write, understand science and math, and learn a language of choice- Latin in the case of Avery. Other than studying, she would spend her time playing with other children and helping to tend to a community garden.

While Avery had a very traditional homelife in some senses, she was also raised by her parent's friends, colleagues and students. This has allowed Avery to have the skill of being able to make conversation with nearly anyone.

Now, Avery may sound to good to be true and that is because nothing in this life is perfect. Avery has a mean competitive streak- to the point where no one can be better than her at anything. Avery will become a bully, knocking anyone else down who shows the slightest bit of potential at being better than her. This makes it hard for Avery to respect others, as in her mind, no-one can be as good as her.

The girl's first instance of magic happened when the girl was seven, tending to the garden. A thorn stabbed the palm of her hand, but just as quick as the shock of pain arrived, it, and the thorn, where gone.