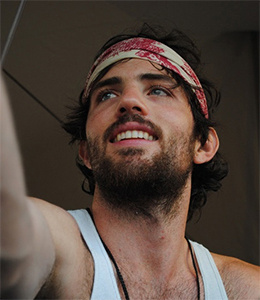 Physical Description: Tuesday Jeremiah Irons is a tall man, roughly standing at six feet tall (182.88cm). The man’s dark blue-grey eyes were perpetually half-closed, and a small relaxed smile was worn on his lips at all times. The man’s black hair was medium length. It was long enough to where the hair could cover his eyes if he didn’t have it swept to the side. Normally the man wore a bandana around his forehead, to hold back his hair. It was much easier to garden without hair hanging around his face. Tuesday also sported a well-maintained beard. He is well built but obviously much more lithe than bulky.

Mental Description: Tuesday is a man with a generally calm and happy disposition. He is hardly seen without a light smile on his face. The was a lackadaisical way about him that seemed to imply that he didn’t really care much about having to get somewhere on time. Though even if he is normally quite laid back, the man gets loud and boisterous whenever excited. Professor Irons is, however, very analytical. Behind his blue-grey eyes hides a calculating mind. In a sense, he always knows where he is, and what he is doing.

Biography: Tuesday was born to Melody and Byron Irons. Two American herbologists, who specialized in the fauna of the poisonous, venomous, and sentient variety. There was never truly a dull day for the boy growing up in Savannah, Georgia. The house he was raised in was overgrown with ivy and vines. Plantlife seemed to spring up through the cracks in the floor, the drywall, and the roof. As an only child of a pure-blood family, Tuesday was raised rather spoilt.

Only several days after his fifth birthday, Tuesday had decided that he wanted to see what his parent’s ‘work conservatory’ held. Of course, that greenhouse was no place for a child. He had snuck in, only to find a world of wild and dangerous-looking plants. It only took moments for Tuesday to understand that he should leave, and so he did. His first instance of magic came from when his parents saw him leave their conservatory. His father, Bryon, called out his name. With a look of guilt and a startling surprise, the boy let out a squeak. Like a squid, the boy exploded in a cloud of smoke. It was hardly big but funny enough as is.

At the age of twelve, Tuesday attended the Ilvermorny School of Witchcraft and Wizardry. He was a Horned Serpent, of course. Tuesday thankfully did well in all of his subjects, but particularly excelled at his herbology and charms courses. He had the mind of a scholar, but something in his heart had led him down the path to join the US Auror Division within the MACUSA (Magical Congress of the United States of America). After his long industrious career in law enforcement, Tuesday saw that there was in fact an opening at a certain school for his first love. Herbology. And here we are now.