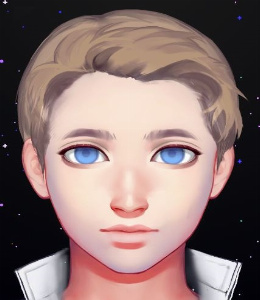 Dirty blonde hair, kept a few stages above short usually combed into some semblance of order, with a part to the left, set above a thin brow and pale blue eyes, his features are a bit stocky, youth shown in rounded cheeks and a stubby chin. He is a pale lad, overall, with clear complexion, and has a slightly eccentric sense of fashion, but keeps himself clean.

A thoughtful, perceptive child, he is very emotionally intelligent and empathetic. He can be a bit on the passive side, preferring to follow rather than lead. Imaginative, he fancies that he likes creation such as music and art, but spends more time admiring these rather than creating it. At least so far.

The third child of four, he grew up in a Wizarding family in Old Town, Scotland, with an older sister and brother, and a baby sister. So he was in the perpetually overlooked side of the family, with the baby sister soaking up most of the attention, and his two elder siblings often taking the lead in the family. Which suited the family fine, as his family had a strong Gryffindor tradition - boisterous and brave, with his father being an Auror and his mother serving the Ministry in a secretarial role.

Being overlooked suited him just fine. He often was caught up in the wake of his elder brother's mischief, being the quiet person backing him up, or listening to his crazy schemes.

He didn't have many friends of his own growing up - he was drawn to similar children, quiet types or those with a growing musical or artistic talent. He has one close friend in another young man who had this demeanor, Scott.

His parents and brother would always push him into 'Gryffindor-like' behavior, though, and he is secretly terrified of ending up in another house, or, Merlin forbid, Slytherin, and so he was keen on backing up his brother (and sometimes his sister) on their activities, which were often physical like sports or outdoorsy activities.

To set the stage, his older brother on a summer holiday from Hogwarts was dragging him along outdoors, in order to catch a kneazle that was a pet of the old widowed woman next door. Said kneazle was always running away, and Tristan suspected it was the 'special diet' the elderly creature was on. Regardless, his older brother oft volunteered to help with things like this, and Tristan was often his sidekick in this.

When they managed to find the kneazle hiding in a thorned bush, his elder brother, of course, was trying the new spells he had learned over the last year - none of which particularly suited coaxing a scared, elderly cat from a thorny bush.

In an uncharacteristic fit of emotion, Tristan shouted at his brother to use a better spell, and the thorny bush turned from green to an unnatural purple-yellowish color. Tristan, at first, thought his brother had cast something, but his brother recognized that he did no such thing. And with his father being an Auror, he soon turned Tristan's accidental spell-casting in.