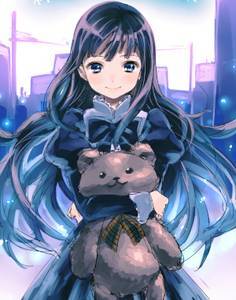 Physical Description: Momoji is very small for her age and she doesn’t look eleven. She has striking pale blue eyes, light creamy skin, And long midnight black hair that goes all the way down to her feet. She is always holding her brown bear named Kuma. She has a look of sadness and being alone in her eyes.

Mental Description: Momiji is a very smart kind and considerate girl. She's hard-working and very loving towards those she cares about. But she’s incredibly shy and insecure when it comes to making friends. She’s awkward and clumsy, the type of girl that could fall over standing still. She tries to do everything herself even when she could really use the help. It's hard for her to rely on anyone anymore.

Biography: Momiji’s parent’s fell in love against all odds. They hated each other in school and always wound up getting into fights. Their families have been at war with each other for as long as anyone could remember so it was natural for them to hate each other too. It was after they graduated that things had changed. They were fighting again but then momiji’s father John really hurt her mother Hinata. He couldn’t just leave her so he ended up healing her and nursing her back to health. They got to talking and realized they really didn’t know why they hated each other. Sure there was a lot of bad blood between their families. But for the two of them? It took only a week for them to fall in love. But after all of that they weren’t sure what to do they couldn’t be together or they could but they’d have to leave their families behind.

They needed to talk to someone so they went to the people they trusted the most. Their best friends, they had a lot to say about the matter but all in all they wanted to help them. They were witnesses at their wedding before Hinata and John left to travel the world together and find a spot they could call home away from where their parents lived. They settled on a small town in Japan Even though Hinata’s family came from there long ago John understood her need to be somewhere somewhat familiar and she blended in with the Japanese culture being of japanese descent herself. Their friends became secret keepers for them so they could keep hidden from their families. Hinata became pregnant and Momiji was born. The first couple years were filled with joy John became a rice farmer to the muggles locally and it seemed like everything would work out.

Until it didn’t. Someone let out the secret because both hinata's mother and John's father came to the house. Late at night. When they saw what they had done, that they had mixed their bloodlines and made momiji. Well all hell broke loose. Both of them couldn’t condone momiji’s existence and even though it went against wizarding law they were bound to kill her. Momiji’s parents tried to defend her but when it was over there was a huge explosion. The house and part of the farmland was gone and the only survivor was momiji. (Unsure how much detail i would be allowed to put in here)

When the muggles came to examine everything they found momij crying they took the little toddler and took care of her until they found her new parents. It took a while for little momiji to warm up to them but they were always kind and loving and patient and momij came to love her new mom and dad. Her new parents figured out how bright she was and enrolled her into a school that would help educate her mind quicker. She quickly was getting through her grades taking some highschool courses when she was only 5 years old. But that didn’t help her when it came to making friends she was always a shy girl when it came to being around anyone outside of her family. She got bullied and because of that she got very bad anxiety the only thing that helped was the bear her parents gave her when her adoption was official. She started taking it everywhere with her which caused her to be bullied more. When she was 7 however her life would be changed again. Her new father got a job promotion and they moved to england. They had a school there as well that would help her especially when it came to learning english. She had a hard time making friends in her new school too but Momij was okay with that or at least that's what she told herself. She had friends in her books. Momiji loved to read and because of that love she was able to learn english rather quickly. Often kids in her new school saw the girl in the library holding her bear and reading whenever recess happened. She got picked on on the way home from the school and it started getting to her more and more. Her parents made complaints but it didn’t help. One day after she got in trouble after a school trip the kids blamed her for something she didn’t think she did. And as she was trying to explain it there was an accident and momiji was the only survivor again.

Momiji was put into a group home and she had a few injuries that took time to heal. She went into herself becoming even more closed off from people the day she went back to school all the kids stayed away from her they felt sorry and the few who bullied her felt even worse. For the next few years she lived like that. All while strange things happening around her now and then a book out of reach she wanted to read suddenly falling into her hands. Kuma getting a cut in his fur finding it prepared in the morning like it hadn't had a cut in it at all. Little things like that. Then a letter arrived. She didn’t believe it so she tore it up and put it in the fireplace as kindling. When more letters arrived she thought she was getting pranked or spammed by some company like the phonecalls the group home got only with letters this time. But when a Hogwarts staff member showed up and explained things to her, even showing her a little magic to help make her believe she didn’t know what to do. She was following her adopted parents plan so far going to school to get a job in something. What she hadn’t known and now this whole new world was opening before her. It took a lot of time for her to make her choice but honestly it was an easy one. No one there really wanted her anyway so why not go somewhere she could learn even more things? She loved to learn.

First Instance of Magic: When out on a school field trip to a lake in england. The bullies were trying to push her in the lake. She was scared she didn’t know how to swim and she really didn’t want to go into the water. She closed her eyes and then suddenly a couple of them were in the water. Kids blamed momiji for pushing them in but momiji hadn’t pushed them at all. It upset her a lot, especially when her parents were called to pick her up for the trouble she caused. One of the kids had gotten a long scratch on their leg from a rock, another had bumped their head. They kept saying momiji was lucky they didn’t get hurt worse. Her adopted parents didn’t know how it even happened considering the kids who went in were twice as big as her but they decided to talk more in the car on the way home.

(I’m hoping this is okay i could have added a lot more details in her parents deaths but i wasn't sure how much detail was allowed i'm really wanting to join this site i even remade this account after no one got back to verify me i hope this time i can get verified or given some way i could talk to someone about this. Either way i’ll remove the ooc talk when all is said and done.)