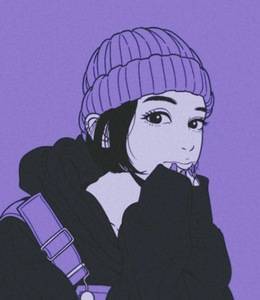 Physical Description: Fayth is a twelve year old girl who's half-Filipina, half-Caucasian. Her skin is a faint caramel color. She has short, chin-length black hair and nearly-black, dark brown eyes. She appears rather average for her age, standing at 4'11" and weighing around 80 lbs. She has four piercings, one on her left ear and three on her right. She mostly wears oversized clothing.

Mental Description: Fayth is amiable yet quiet girl who's always striving for her aspirations, despite what she does or doesn't let on. She has a good heart and tends to see the potential in people, so she has no problem with moving on, but she definitely won't forget. Although she's friendly, Fayth keeps to herself and isn't very outgoing, especially when it comes to her social life. Many find her to be reserved for the most part but it doesn't take much for her to open up. She's also not afraid to speak up, especially when it comes to things she's passionate about or cares greatly for. But Fayth isn't really a fighter; she'd rather use her mind to get through things with as least amount of casualties as possible.

Biography: Fayth was born in Manchester, England but grew up with her grandparents in St. Ives. Her father passed away from sickness and her mother spends most of her time doing research abroad with her colleagues. Fayth has a younger brother named Elyjah who's nine years old. They get along fairly well until their mother's around on the rare occasion, in which they compete for her attention. She also has an older half-brother named Leon on her father's side. Fayth doesn't mind living with her grandparents, but she wish she could spend more time with her mother, who she always looks to for inspiration and wisdom. She attended muggle primary school, where she did best in literature, until she received her letter from Hogwarts.

First Instance of Magic: Her first sign of magic was when Fayth was six years old and trying to help her uncle when he when he was moving. One of the boxes were left ontop of his car and she attempted to hop and grab it until suddenly the box jutted forward as if someone had pushed it from behind. Luckily Fayth's uncle caught it before the box could fall on her, and she was told to be more careful.