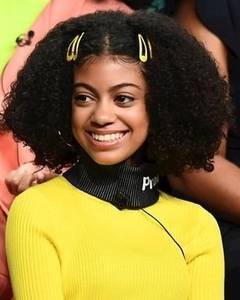 Age: 11
Height: 4'11"
Weight: 81Ibs
Felicia is proper and tidy for an 11 year old. Although her hair is big and kinky, she styles it so that her curls are defined and have a vibrant sheen. She is tall, lean and lanky. Plus she has a competitive spirit, which makes her naturally good at athletics. Her brown eyes compliment her smooth caramel skin and you will most likely see her sporting a jovial smile as she makes attempts to make you her friend. However, she is not the type of person who needs to be around friends all the time and she is cautious about who she opens to. So if she feels like you are crossing her or don’t have the best intentions, she will not hesitate to break away from you and move on.

Even as a child, Felicia valued her independence and her childhood was a constant journey towards self-reliance. This disposition of hers was particularly useful since her parents were traveling artists. Her parents, Aria and Jacob met while attending the Wizarding Academy of Dramatic Arts. After graduating, they both followed their dreams to act in theater shows all over the Wizarding World. While her parents were on tour, which was 10 months out of the year, Felicia lived with her Auntie Grace. Auntie Grace was a constant source of love and security for Felicia growing up. Everyday was a new opportunity to learn something new and Felicia could count on her Aunt Grace to help her learn how to take care of herself. She practically learned everything she knew from Auntie Grace and she watched intently as her Aunt performed various household chores and was mesmerized at how Grace's magic enhanced otherwise monotonous tasks.

Her Aunt was great at many things, but cooking was not one of them. Despite the bland delicacies Auntie Grace prepared, Felicia always was a good sport about being a taste tester. It was during one of their morning cooking session that Felicia displayed her first unintentional use of magic. Auntie Grace made a breakfast porridge for Felicia to try. The first bite tasted mushy, and rather glue like. Felicia suggested adding sugar, and gleefully cheered as Auntie Grace went to fetch her sugar bowl. However, just as Grace started adding sugar, Felicia's excitement caused tiny cracks to form in the bowl until eventually, the entire thing shattered. Felicia’s first use of magic left the entire counter covered in sugar crystals. She was mortified. Auntie Grace on the other hand insisted that this moment called for a celebration! Grace started collected cook books so that each week her and Felicia could try a new recipe. She even gave Felicia a few cook books to try on her own! Felicia was delighted and the thrilled child began to develop an affinity for cooking.

Felicia’s family, particularly Auntie Grace, constantly reminded her how smart, special, and talented she was. Their love and support helped her carry herself with dignity and gave her a strong sense of self confidence. Even though she often felt lonely due to her parents’ absence, she knew the beauty of feeling loved and her Aunt’s selfless and loving spirit rubbed off on her. Although she is young, she possesses a mature spirit and a kind-hearted nature towards others. However, she has a tendency to be overly prideful in herself and is ashamed to showcase her flaws and shortcomings. Felicia is more likely to accept defeat and struggle through hardships than accept the aid of others. She can have a bit of a stubborn streak and struggles to respond well to criticism, often taking someone’s critique of her performance as a judgment of her character. She works hard to keep up a perfect persona and works extra hard to make people have a positive view of her. As she begins her journey at Hogwarts, she hopes to hone her skills as a witch and impress her classmates and professors alike. Hopefully, she will be willing to show some vulnerability and accept the support of her friends as she faces obstacles at Hogwarts head on.