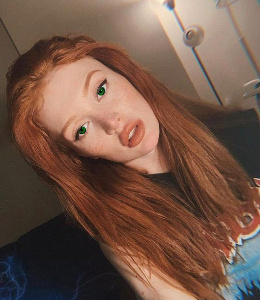 Lydia grew up in Brighton as any normal muggle kid would. She lived in a flat on the seaside with her mother, father and little sister. Her family was well off but her parents still made sure that both of their kids would not grow up spoiled, teaching them to enjoy the simple things in life, like a stroll around town or a walk on the beach. She was a particularly curious child, always with her nose in a book or up in the sky, trying to see as much as she could of the world that surrounded her.

Her family history was the opposite of what she thought it was: her mother and grandmother had never told her that in their family they had Veela’s blood. Her grandmother was a full Veela, that married a wizard and had Lydia’s mother, who was half Veela and half witch.

The first time that Lydia showed any sign of magic was when, after a fight with her mother regarding her little sister, she went out on the beach. She was making rocks skip across the water when suddenly one of the rocks just stopped mid-air for a few seconds before falling in the water. Of course, being a very excitable kid, Lydia ran to her parents to tell them what happened, but they simply brushed it off as her using her vivid imagination. From that moment, whenever she would get too upset or extremely excited, little weird things would happen to her, like a pen levitating or a light being turned on or off without anyone touching it. But nobody ever believed her when she told them about these things.

That’s until her Hogwarts letter arrived.