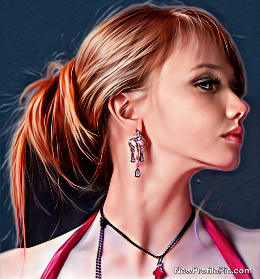 Relatively petite compared to her peers, Evelynn has always had to make up for her lack of physical presence with that of intellectual. Although her auburn hair and pretty face have certainly helped to pave her path in certain circumstances, she learned long ago that one could never rely on looks. As a result, she tends to downplay her appearance despite striking grey eyes, and maintains a reserved air with an emotional distance from others.

Her mother would always deny any sense of expressed loneliness, of course, telling her that she was simply independent. Strong-willed. Not beholden to the need of any other's attention or emotional affirmation. This encouraged Evelynn to lead an existence of exploration and self-expression.

Never really feeling like she fit in properly, however, she was left to observe the interactions of her peers from an outside perspective. Although some might call that unfortunate, it did allow her to develop her psychoemotional intuition and an ability to gauge the intentions of others to a level well beyond her years. Inquisitive, cunning, and intuitive, Evelynn excels in all pursuits academia and thrives in the acquisition of all forms of knowledge. The collection of secrets, in particular, has become her recent guilty pleasure.

Evelynn was born in a small town on the western coast of Canada. She was raised there by her mother, a single, working woman. She studied at a public French immersion elementary school, attended church every Sunday, and was enrolled in several extracurricular lessons such as swimming, violin and riding. With the exception of the lack of a typical nuclear family, she lived a happy, fulfilling childhood -- a muggle childhood -- filled with many friends, fond memories, and even an animal companion or three.

It was after the Christmas holidays, in the dawning of 2017, that Evelynn's world seemed to turn on end. Quite literally in some respects as she found herself travelling nearly to the opposite end of the globe.

As tends to be the case, young children rarely know the full picture of what exactly it is that their parents do for work. Evelynn had gone with her mother on the rare occasion when alternative accommodations weren't possible, and seen her place of work. She knew that her mother worked at the hospital, that she filtered through hundreds of pieces of paper a day, sorted file after file, stared tirelessly at a computer screen for hours on end, spoke with disembodied voices on a phone, and performed any number of other duties. But that was it. And what did that truly tell a child?

So when her mother informed her that she had received a promotion and would require moving across the world to England for the two year contract, Evelynn didn't know what to think. She didn't know what to do. All she had ever known had been there in that town.

She tried to stay positive, to make new friends and invest in new hobbies as her mother encouraged. But it wasn't as easy as willing it to come into existence. She had left school in the middle of the school year, leaving friends and Grandmother behind, to be transported to a new home in a new country, and a to new school to boot.

It was during these trying times attempting to regain a sense of normalcy in school that her magic first began to manifest. It was small at first. Something she hardly even noticed herself, initially. Anxiety at having left her lunch at home, she would return to her locker to find it waiting for her there despite no note or indication that her mother had come to drop it off. When a test returned with part marks deducted due to spelling error or technicalities, she would scour through the assignment only to find that whatever errors the teacher had found were.. oddly missing, and she would be granted a corrected score more indicative of her proper knowledge.

On one occasion, one of the students had hounded her all day, mocking her accent and evident lack of knowledge on the basic social and legislative structure of Great Britain in a social studies class. Finally, having had enough, Evelynn had angrily shouted at them to leave her alone. To this day, that student swears that her eyes had flashed with a white rage and leaves her with a wide birth "for fear of waking the demon within".

Poppycock, Evelynn would say. All of it. But when that first half-year of state primary school concluded and Evelynn was shipped to a private boarding school due to her mother's increased work responsibilities, even Evelynn could no longer rationalize the odd occurrences.

Again, it was largely mundane events: the drink container of a bully exploding in their face if Evelynn was feeling particularly vindicated; the whispers of gossiping girls becoming amplified; the in-explainable way her hair had returned to its natural auburn state after having had it forcibly died brown by the head girl...

Perhaps the most extreme example of unusual happenstance, however, was when, in a moment of vulnerability, Evelynn let slip to one of her classmates that she was raised an only child by a single mother. That she never knew her father. But she had once overheard her mother speaking with someone else telling them that he was a dangerous man, someone to be feared; and that part of their reason for the move to England was to put as much distance between them as was able.

It had scared Evelynn, this idea that some unknown man had been her sire. What scared her more, however, was the girl's reaction, who had immediately labeled him with names such as "monster" and "stalker", and speculating that perhaps he was a "bad-guy" or maybe even "crazy". Evelynn urged the girl to keep it to herself. To keep her secret. But the next day, Evelynn's peers began to give her looks that were more peculiar than usual, giving her a wider berth than usual.

As it happened, when Evelynn went to confront the girl who had shared her secret, she found her cavorting with another, whispering what Evelynn could only assume was the very thing that little witch had promised to keep to herself. Evelynn was desperate to shut her up. Could remember pleading with God to make the girl change her mind, to hold her tongue, to do anything to make this stop. And all of a sudden it did. To everyone's horror, the tattling girl's voice seemed to vanish. Try as she might and despite appearing at several intervals as though she were screaming, nothing escaped her lips. Terrified of the potential implication of what she was witnessing, and fearful that she had been the cause, Evelynn had screamed and fled the scene.

Over time, it wasn't just her faceless father to received the names, but Evelynn as well: "monster spawn", "Evelooney", "Barmeve", among others. This resulted in a gradual withdrawal and eventual near total social isolation by the young redhead. Feeling like she could no longer trust her peers, never-mind develop any meaningful relationship with them, she maintained herself at a distance to observe as an outsider. Instead of human friends, she made animal friends, and could often be seen speaking with them as though they could understand her. And sometimes, it almost even seemed as though they could.

It was a lonely existence, the years Evelynn had spent in England. But one that had largely become the norm. After a while, it seemed to settle. Her peers kept their distance, the bullying faded, her mother kept herself occupied with work and emotionally distant, and Evelynn did as Evelynn would do.

At least until her eleventh name-day when she experienced a turn of events of an entirely different sort. And that is where this story begins....