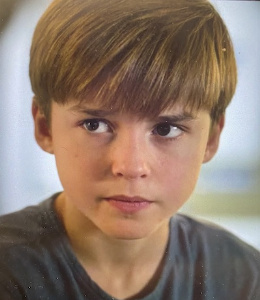 Jake Morris is a shy and sensitive kid, very sweet and caring but also very easily frightened. He is an innocent and naive boy who doesn't know much about the world but believes idealistically in good and evil. He's pure-hearted and kind, and wants very much to be good. He doesn't enjoy sports or roughhousing, he prefers to draw, to read, and to play with stuffed animals. He loves animals of all sorts. Jake is shy, and very nervous around other kids. He tends to be quiet, especially in groups, but will talk much more freely about his interests when he feels comfortable.

Although Jake scares easily, he values and admires bravery above all else. While Jake does not know the strength that lies inside of him yet, he looks up to those who are strong enough to stand up to bullies, or to stand up for those weaker than themselves. What Jake would admire most would be somebody his age and size who has the strength to stand up for what they believe in. That would be somebody that Jake would idealize, because it's really what he wishes he could be but doesn't think he can. There IS, however, a lot of inner bravery inside of him, and though you wouldn't know it to look at him, Jake does want to be strong, and to fight for what's good and right in the world. Though he tries to avoid them, when it comes down to it, he does face his fears and do the right thing in spite of them. One day he will grow to do whats right at all costs. He is a loyal boy, who would courageously defend his friends if it came down to it. He would die for the people he loved.

As for appearance, Jake is a tiny boy, easily mistaken for a kid some years younger than he is. He is delicate and frail, with blonde hair and deep expressive brown eyes. At home, he tends to dress in brighter colors (though doesn't pick his own clothes). He is very bad at hiding his feelings, and they usually show very plainly upon his face, especially when he's scared or sad.

Jake comes from an upper-middle-class family that was very protective. He is very close with his parents, especially his mother. Jake's mum took him out of school when he was little, and has homeschooled him since. It was actually at his old school that his magic first showed itself, when he was very young. Some bullies who were picking on him (Jake was a very easy target for bullies) were suddenly flung away. After that day, Jake was taken out of school and kept sheltered and isolated from other children. He was well-loved by his family, and given the space and acceptance to grow at his own speed, but he had very little independence or social experience, and has a ways to go in maturity. Arriving at Hogwarts presents him with many challenge. He doesn't yet know how to take care of himself, is easily frightened of any perceived threats that might hurt him, and is shy about his own interests that might make him a target or 'different'. He doesn't yet know how to interact with other kids. In general, the other children scare him.