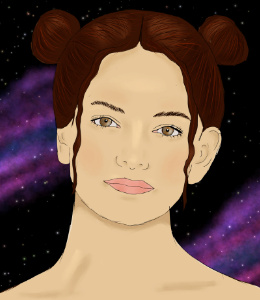 Logan Baird was born on June 20th, 2008 in Perth, Scotland. She was the first child of Adam Baird and Olivia Baird. As a young child, Logan could almost always be found in the library with her father, or the horse barn with her mother. She spent a majority of her childhood with her mother, learning to dance, ride horses, and even cook a little (although she isn't good at it). When she was three years old, her younger brothers were born. Both of her parents assumed that she would be jealous, but by the time they were old enough to walk and talk she had gotten them to cause trouble with her. They were all trouble makers, especially when they got into the kitchen. Her mother even home schooling the kids instead of sending them to a public school, afraid that they would show signs of magic.

At the age of six, Logan wanted to play with the family cat in the kitchen while her mother was cooking dinner. This caused the young girl to end up getting scratched. In return, the little girl got angry and sent the cat out the open kitchen window. Luckily he didn't get hurt, but he refused to go near the girl for years after that. She got reprimanded for throwing the cat out the window, but neither parent was truly mad at her. After that, when she had major bursts of emotion, random small things would happen because of her magic.

A few days before Logan's 9th birthday, everything came crashing down on the family. Sadly a car spooked Olivia Baird's horse while they were riding and she passed away due to her injuries. The Baird family spent weeks in grieving before any of them did anything. Logan having taken the accident and death the worst having been out riding with her mother at the time. Adam Baird starting making work his life, the twins started causing even more trouble, even getting in trouble with muggles for causing disturbances, and Logan started making dance and horseback riding her life. None of them talked much to each other until Adam Baird's sister, Hannah, moved in with them a few months later.

Hannah Baird started to raise the children along with the Baird family house elf, Kall. Hannah Baird became the mother figure for the children, even though they all knew that she was never going to be a replacement for her. She tried her best for the children but the twins continued to be trouble makers and Logan continued to keep to herself unless spending time with her brothers. At this point in their lives, Adam Baird was barely there, afraid to see his children without their mother.