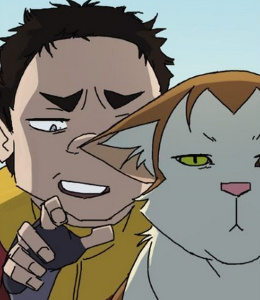 From a well-to-do wizard family, operating a candy shop in the heart of London, Galton's childhood was filled with ease, and laughter. With the assistance of magic, the Lansdale family had operated Lansdale's Lollipops for over 2 generations. Specializing in over the top flavor, shaped and colored Lollipops, the business sees a steady stream of customers everyday. At an early age Galton became accustomed to assisting his family with the day to day workings of their shop - everything from stocking shelves to closing blinds when their magic would make an appearance. A sweet tooth seems to run in the family, it is certainly present in Galton. Their is neigh a time the child is not trying to obtain some sort of sweet.

A vanished jar and shop floor littered with candy was the first sign of Galton's budding magic potential. At 7 years old the Lansdale family realized they had yet another wizard joining their ranks. Magic was common-place enough, and Galton knew such things needed to be hidden from the greater world, so an opening dialog about the use of his powers came easily. For the next few years magical questions came up seldom, instead Galton watched a bit closer to what his mother and father were doing.

When the invitation to Hogwarts came, the Lansdale family was a tiny bit relieved. At his current age Galton had taken to collecting certain pets which were frowned upon in food-filled environments. After a close run-in with the health inspector, Galton's hidden frog collection became known by his parents. Galton doesn't know where the frogs are now, but his parents promised they were still croaking.