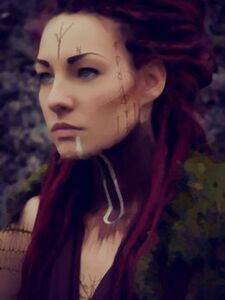 Born in Flateyri, Iceland, as oldest of three sisters, Béatrice had to learn to work hard in order to survive. Her family was poor such as most of the other 200 inhabitants. There was nothing besides a big hill barely a mountain, and the vast sea. Every last family was involved in fishing, but during her childhood the ships laid still with nothing to hunt. The swarms of Greenland sharks weren't coming for years and the wale hunter fabric has burnt to the grounds, leaving the inhabitants with nothing.

It was during that time that Béatrice was invited to begin her schooling at Durmstrang. She had been the first since her great-grandmother to show magical potential and she would be the only one of the sisters.

Having seen and experienced proverty and helplesness she suddenly had a purpose and a future she could look forward to.

When she first had attended Durmstrang she had been a skinny girl, with dull eyes and bad teeth. She couldn't understand the others since she had been speaking an Icelandic dialect. It took her months to learn the universal language which showed in her academics.

Despite her bad start she grew up to be a tall woman with broad shoulders. Compared to her classmates she was no powerful witch but she inspired by old tales her father had told her and her sisters during the long night, she developed a liking to runic classes. While some of her peers had striven for a career as powerful wizards and witches with great influence, Béatrice wish had grown to help people.

Immediately after leaving the school, she had travelled through Iceland, Norway and other countries, always walking on a path her heart had lead her to. She stopped where she felt her help was needed. She gave guidance, advice or sometimes just a smile.

An elder woman simetime called her "Völva" and although Béatrice hadn't known what this means at that time, she accepted the role the woman had given her, claiming it till this day.

Now she herself is an old woman, 113 years of age. She uses a long wooden staff to aid her walk. Her hair has turned completely white decades ago, but it is hidden beneath a layer of mud and clay, making them look redish. The runes had become her constant companions and she had learnt to use their powers to her advantage. Glamours anchored into various runes which adorn her skin are making her look like a woman in her 40s. She had learnt that people would listen to her thinking she was middle-aged than a crazy old lady.

Her heart has lead her to Hogwarts where she now was needed.