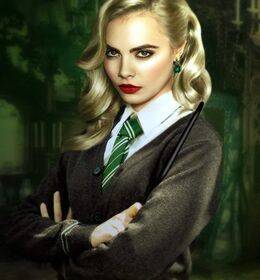 Appearance: Five foot three with green eyes and slightly tanned skin. Her medium length tresses have an unusual indigo hue and it would be her only unique physical feature. Hope
Personality: Quiet and thoughtful, the prefers to observe others before inserting herself into a situation. Despite her best efforts to appear intelligent and put together, she can be naive  due to the fact that she has had little contact with muggle society so non-magical means of problem-solving are sometimes seen as needlessly difficult or senseless. Her major flaw is jealousy or rather envy, at times this can be seen as rather similar to avarice because in many ways it is the same thing. She does not want to see others do better than her. In fact, there is a cruel part of her that finds humor in the misfortune of others/
History: She grew up the only child of a pair of wizard parents. She was home schooled until she was accepted into Hogwarts by her mother. This has given her a great deal of book-knowledge but sometimes her social graces and tact as lacking. She had limited exposure to other wizard children but she had never met a half-blood or pure muggle during her youth. Her parents thought poorly of them, that they were 'less valued' or 'unimportant.' For the most part she was never given a reason to disagree.

Her childhood was essentially uneventful besides her admission to Hogwarts.